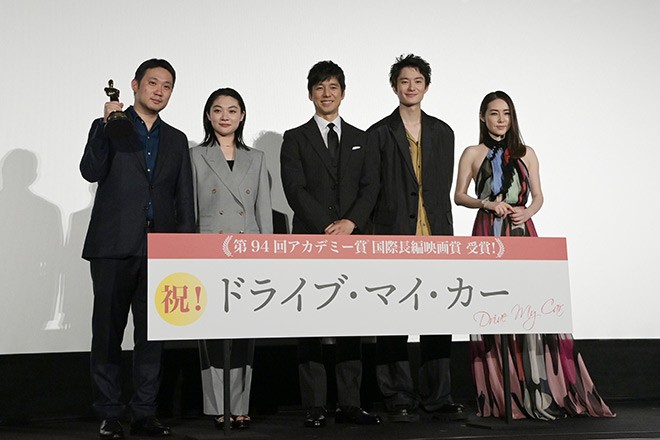 Returning to Japan to be greeted as a hero, director Ryusuke Hamaguchi, whose ‘Drive My Car’ last month won Best International Feature at the Oscars, has expressed hopes of one day making a movie in Hollywood.

“I want to shoot it if there’s a topic I can really tackle and a supportive environment,” he said at a Tokyo press conference on April 5.

Asked about his impression of the American film industry, Hamaguchi described it as “a truly extraordinary world with budgets of unparalleled magnitude”.

But Japanese and American filmmakers aren’t all that different when it comes to what inspires them to make movies in the first place, he added.

“They make movies based on their own personal experiences,” he said. “They work to translate into films the joy they derive from films and the pain in their souls from what they have experienced in their own lives.

“I was convinced that starting with a personal thought is the only way to make films and reach audiences,” he said.

Hidetoshi Nishijima, who starred in the film, said he felt the same way about the actors.

“We have to strive for a performance that we ourselves can believe in,” he said. “A lot of Japanese actors have such potential.”

“Drive My Car,” which is primarily based on the short story of the same name by Haruki Murakami, tells the story of the great loss, grief, and rebirth of a soul and the power of art. It stars Nishijima as the protagonist, Yusuke Kafuku.