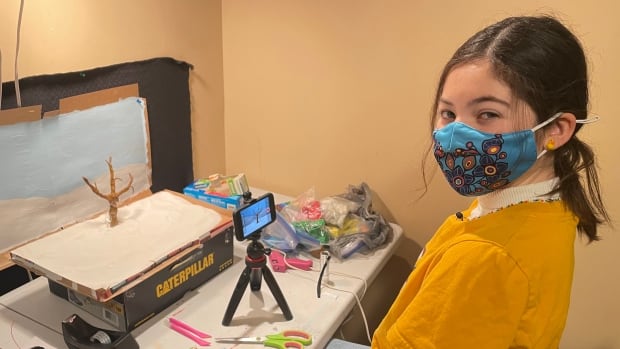 12-year-old Emora Baggett has been interested in cinema since before she was in kindergarten, so when her father – a musician – asked her to make a music video to play alongside a song from his new Christmas album, she took out her clay and started filming. .

Emora began experimenting with a form of clay-based stop-motion, also known as claymation, in the summer of 2020. She has posted a few videos, some following a clay character called Tibby’s Tales, on her YouTube channel. .

In this case, she made a festive film to accompany a recording of her father’s new music album titled “Let Nothing You Dismay”. It took him a few weeks and about 17 hours in his studio in the basement of his home in Fort Qu’Appelle, about 74 km northeast of Regina.

â€œIt’s fun and you can show yourself through it, like you can kind of show what you’re thinking,â€ she said of her claymation creations. “I kind of thought of something when I was listening to the music.”

In the clip, traditional holiday tokens seem to fall into place: a snowman forms from freshly fallen clay; a traditional Christmas feast is prepared before climbing the dining room table to appear on the plates; and a pair of lace-up skates while an evergreen tree adorns the appropriate Christmas outfit behind them.

But, overzealous skates spin quickly on the ice and produce a tornado, which tears the stages apart and demolishes each one.

This is Emora’s favorite part.

â€œI don’t know if you can really see it, but in the tornado, I taped the snowman’s head to the tornado so you can see it spinning,â€ she laughed.

Brian Baggett’s recording of Carol of the Bells, originally a Norwegian folk song called Shchedryk, plays havoc in the background. For him, the video has become the most anticipated part of his album release.

â€œWe were watching little clips, little 10 or 15 second scenes along the way, and I was like, ‘This is going to be something,'” he said.

When Emora was four, Brian was fired from a construction job he was doing at the time and stayed home with Emora for about six months, he said.

â€œSo I thought we might as well start on this. “

Pre-teen from Fort Qu’Appelle, SK is busy making her own clay videos from her basement

12-year-old Emora Baggett has been interested in cinema since the age of four. She has now made several stop-motion shorts. 1:17

Soon after, he gave her a digital camera, some advice and even played for her. Now he’s thrilled to see what emerges from his mingled love of stories, aptitude for detail, and patient demeanor.

The Baggett family is artistic. And Emora said that her mother Angela Baggettt, who is an amateur painter, and her father support her creative pursuits.

â€œIt’s just calming enough. I love that you can do something and have it forever,â€ Emora said.

â€œI think I would keep doing this until I’m older, at least,â€ she said. “I think in the future I would like to do something along the lines of writing a story, or stop motion, or movie, or something. That would be cool.”

Claire Foy Says She Feels “Exploited” While Filming Hollywood Sex Scenes: “It’s The Most Sinister Thing You Can Do”