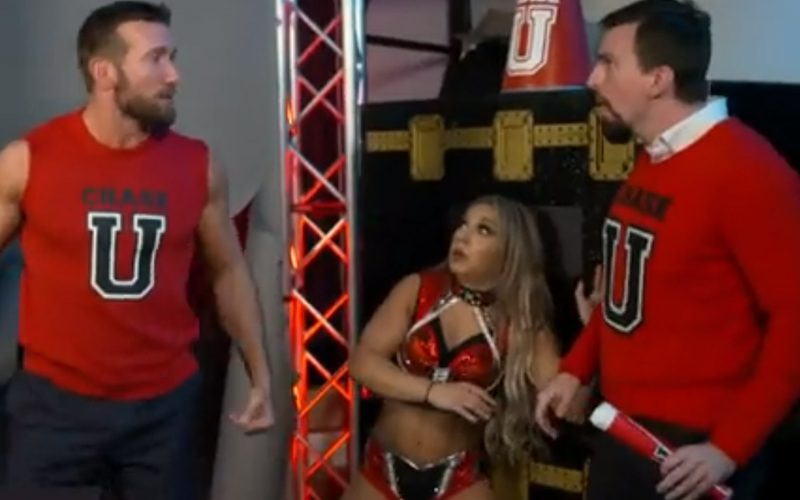 Bodhi Hayward was in the middle of a storyline with Andre Chase when he received his release papers. Tonight, WWE referenced the Chase U alumnus to continue their TV storyline.

During a backstage segment with Andre Chase on NXT this week, Thea Hale looked at the flag from the side and asked, “Who’s going to carry the flag?” It was an obvious reference to the liberated superstar.

Suddenly, Duke Hudson broke through a wall of paper and volunteered to carry the flag. Later, Booker T said, “That other kid got his scholarship taken away” twice. Hudson also showed extreme enthusiasm during Thea Hail’s match with Kiana James.

In the storyline, Duke Hudson has Bodhi Hayward taken over in order to take his place as a prized student at Andre Chase University. Hayward reacted to his exit from NXT in a video message where he spoke about his embarrassment and anger.

For those not in the know, WWE released several NXT stars, including Bodhi Hayward, from their contracts during the day. According to Bryan Alvarez, the company released the performers because they weren’t improving inside the ring.

What is your opinion on this story? Sound off in the comments!

Manik Aftab is a news editor at Ringside News. He has been an avid professional wrestling fan since 2000. His earliest memories of professional wrestling involved The Rock against the McMahon-Helmsley faction in 2000. Outside of his writing responsibilities, Manik is a fan of fiction, thrillers, comics comics, manga and anime. He is an occasional journalist and likes to spend his free time watching movies and reading about politics, science, medicine, etc. Manik also enjoys jogging in the park and working out at the gym. Manik is also a big rock band including Linkin Park, Breaking Benjamin, Metallica, Drowning Pool, Breaking Point and Skillet. His current favorite wrestler is Kazuchika Okada and his all-time favorite wrestler is The Rock.

Apple TV+ releases the official trailer for the movie SPIRITED